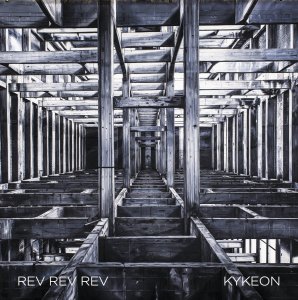 Italian Shoegazers, Rev Rev Rev, have released Kykeon via Fuzz Club, a crunchy 10-track album that is as much a marriage of doomy metal and psych as it is a reverb drenched Shoegaze album.

Kykeon moves along slowly, but threateningly giving it a lava-like quality; sludgy, thick, deadly and unstoppable.  Tracks “3 not 3” and “Sealand” are great examples of this.

There are a few lighter moments. Mid-way track, “One Illusion Is Very Much Like Another” dials back the abrasive fuzz in favour of crisp guitars and unsuppressed vocals, as does “Summer Clouds”, but the menace is still there, barely hidden beneath the surface.

More “metal” moments include “Gate Of The Dark Female” that could pass for a Black Angels/Sleep collaboration, which is never a bad thing and album single “Clutching The Blade”, the fastest of Kykeon’s songs that has an early Smashing Pumpkins vibe that will guarantee repeat listens.

Kykeon is a perfect record for those that enjoy a band that can mix genres without losing cohesiveness.  Psych, Doom, Shoegaze and Alternative all play their part to keep the record fresh and interesting throughout all 10 tracks.

Buy Kykeon on CD and vinyl from Fuzz Club HERE or digital download on Bandcamp.