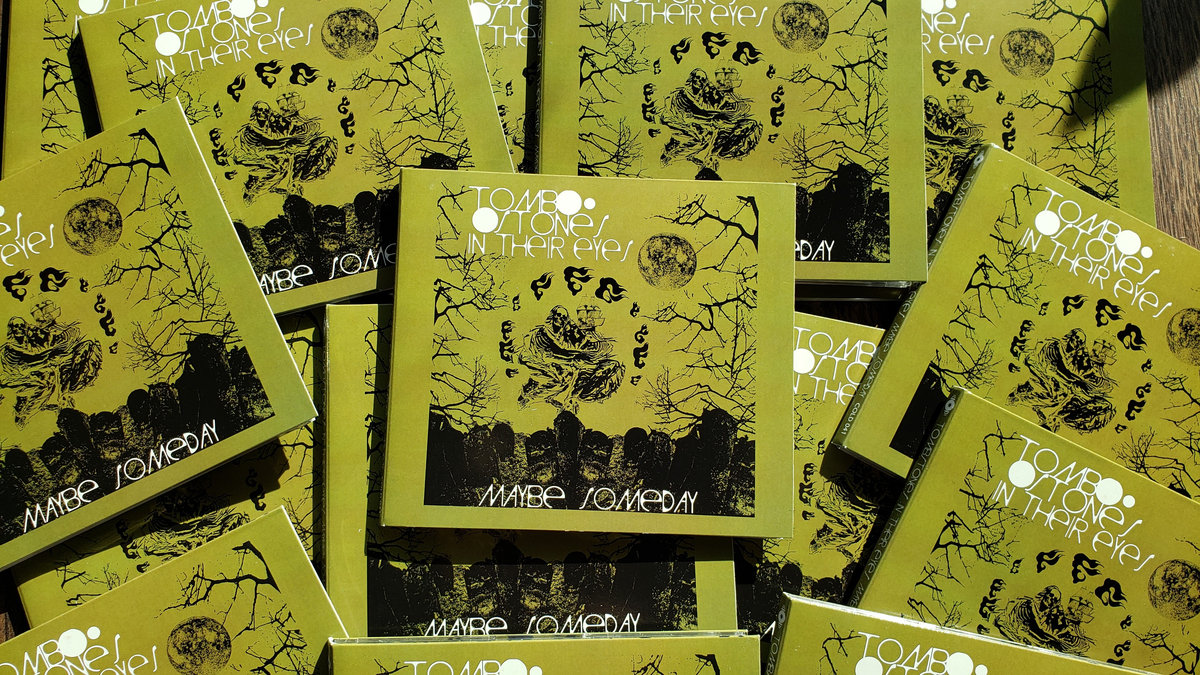 When listening to a record for the first time, I can usually tell within the first thirty seconds of song one if I’ll want to hear it through, skip to song two (or deeper) in search of the chords and vocals that will connect with me, or stop it and never look back. There are also occasions when song one gets repeat playback because it’s so good. And then the same happens with song two. And song three. Music lovers understand this “Eureka!” moment.

Maybe Someday by Tombstones In Their Eyes was my 2019 “Eureka!” moment.

Comprised of John Treanor (vocals/guitar), Josh Drew (guitar), Mike Mason (bass) and Stephen Striegel (drums), Tombstones In Their Eyes is a band from Los Angeles that appeals to fans of psych, noise, shoegaze, alternative, and even sludgy doom metal. James Cooper, an old school friend of Treanor’s now living in New York, is also considered a member as he helped start the band and works with him on song creation. The band released a number of EPs, including 2017’s Fear which was my first introduction to their signature melodic yet crunchy sound, and 2018’s Nothing Here.

On November 15th, 2019, Somewherecold Records released Maybe Someday, and what could be described as a well-polished, cohesive collection of gritty psych-infused noise rock songs.

There is an immediate feeling of immensity on album opener “Open Skies” and the tangibility of this “bigness” caries throughout the title-track and “I Want You”, amplified by the swirl of guitars and the drone of Treanor’s ethereal vocals.  Bass lines and drums are clean and not overstated, effectively complimenting and driving forward the wash of sound enveloping them.

“Down In The Dirt” has a decidedly sludgier feel to it that fans of Philadelphia’s Nothing will appreciate and is a personal favourite, of many favourites, on the album.  Coming in at just shy of six minutes, it’s best played loud, with eyes closed and head bopping.

When listening to the “The One”, it’s not at all surprising that Treanor listed Electric Wizard as one of his favourite bands in our 21 Disarming Questions interview. It’s a dark and heavy stoner rock song, yet feels not at all out of place on Maybe Someday. Like “Down In The Dirt”, it pushes the six minute mark, but I’d welcome an extra long extended version of this one.  It’s that good.

Another shift in direction happens on “I Believe”, the most upbeat song on the album and closest to a “traditional” alternative/psych song before we slow down and slide back into the fog of “I Can’t Feel It Anymore” and “Up And Down” that fans of The Black Angels will surely enjoy.  We leave Maybe Someday with “Dreams”, an aptly-named soundscape of surreal fuzzed-out guitars, vapory vocals and keys.

Tombstones In Their Eyes manages to interlace so many sounds into Maybe Someday without defining the album as any one genre nor lose the mood set out from the album’s opening notes.  It’s a perfect balance and pace and warrants repeated play through from start to finish.

You can get Maybe Someday from the Somewherecold Records Bandcamp page on CD and digital.  Coming soon to vinyl.